Horse breeding is something that is taken on professionally, as well as a natural occurrence. Due to the money involved in both breeding, and selling purebred horses, it is important to understand the potential problems that can sometimes be encountered, and how natural treatments, and our EquiHealth system can both help to treat and to prevent such problems.

The most common mare reproductive problems tend to be:

Different tests are conducted for each of the three problems. Indeed, EquiHealth is safe to use during all these situations, to help destress, and to help relief any associated (or unassociated, but still inteferring) pain or discomfort.

To Assist in a Difficult Labour 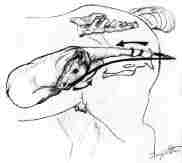 If possible, the foal should be helped gently through the birth canal. Excessive force may damage or kill the mare and foal.

There must be absolute certainty which leg is which. Soap and water lubrication will be needed. If in any doubt, expert help should be sought without delay.

Fertility rests on the regular discharge of an egg into the womb (every three weeks, February to July) and an accompanying attractiveness to the stallion.

Again failure of either may be due to an infection or an abnormality in the system.

Mares may need restraint at the time of mating.

‘In Season’ Fillies and Mares

This refers to the period of about four days, every 3 weeks, when the mare is fully receptive to the stallion.

She stands quietly with tail raised and allows him to mount her.

If there are underlying health problems, or general stresses, she may not be receptive.

This applies to a stallion who has been shown to be fertile but does not mate.

He may be discouraged by a non-receptive mare or not responsive to a receptive one.

The problem is usually one of confidence, which responds to skilled management.

Irregularities of the Oestrus Cycle

There is a normal variation among mares in the interval between ovulations – 14 to 28 days.

No one animal will have constant intervals. Marked variations or anoestrus (no ovulations) will be infective or hormonal in cause.

This must be proven against a mare of known fertility.

Given adequate food, male infertility may be due to a general infection or some abnormality in the male system.

Some stallions need to be helped to engage the mare.

Premature labour is most uncommon in mares.

Abortion due to an infected and/or dead foetus is now a rarity (at least in the UK) because of modern methods of disease prevention.

There may be a flow of milk, indicating that foetal death has occurred and abortion is due to occur.

It is normal for mucus to be discharged when the mare is receptive to the stallion.

Any other discharges, particularly if coloured or opaque, usually indicate an infection.

This will be in the urinary system, the womb or the vagina, since they have have a common opening at the vulva.