Dry eyes, often referred to as “Dry Eye Syndrome”, is a very common complaint. About 15% of the population, in all ethnic groups, experience varying degrees of Dry Eye Syndrome.

Like most eye conditions, Dry Eye Syndrome is often related to health conditions elsewhere in the body. It is commonly associated with dryness of other mucous membranes and interior body surfaces, such as joints and brittle nails. 0

It can also be a sign of digestive imbalances, or of more serious systemic autoimmune diseases, such as Rheumatoid Arthritis, Sjogrens Syndrome or Lupus Erthematosus.

The typical symptoms include dryness, grittiness, irritation, difficulty reading for long periods of time, burning and even the seeming contradiction of excessive tearing or watering.

Blepharitis is an inflammation of the rims of the eyelids, which causes them to become red and swollen. It is very common, accounting for an estimated 1 in 20 eye problems reported to GPs.

Blepharitis is more common in people over 50, although it can develop at any age.

The symptoms of Blepharitis can include:

Blepharitis can be caused by a bacterial infection, or it can be a complication of a skin condition such as:

It is not possible to catch Blepharitis from someone else who has it.

Holistic treatment options start by identifying the potential cause, as this can be very individual.

Natural eye drops may help in the short term, but will only act as a bit of a ‘sticking plaster’! It is the underlying cause that needs correcting.

Once an underlying cause is identified, or at least suspected, HealthPoint acupressure can do its job efficiently, treating stimulation points relating to those causes. HealthPoint has been found to be extremely effective anecdotally and scientifically for many types of eye problems and their symptoms, often with fast relief. Of course it is equally important to ensure dietary improvement. 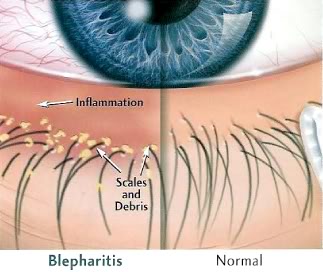